Left High and Dry: The Exploitation of Migrant Workers in the Irish Fishing Industry

“Why am I different? Why does the employer treat me differently? I am a man, I am the same as you.” – an Egyptian fisherman working in Ireland

Left High and Dry: The Exploitation of Migrant Workers in the Irish Fishing Industry (2017)

New research conducted with migrant fishermen working on Irish boats has revealed that severe underpayment, discrimination and exploitation are still rife in the industry.

The research was carried out by the Migrant Rights Centre Ireland (MRCI). In-depth interviews conducted in two phases with thirty fishermen showed that:

“Ireland cannot be proud of the food we produce unless we respect the people who produce it,” stated Edel McGinley, MRCI Director. “Fishing is a tough job in a complex industry, and it’s even more difficult and dangerous for migrant fishers enduring chronic underpayment and shockingly long hours.”

A Government taskforce was set up in 2015 following revelations in the Guardian newspaper that exploitation and signs of trafficking were evident across the Irish fishing industry. This new report reveals that the Atypical Working Scheme developed by the taskforce has in fact compounded problems.

Edel McGinley continued, “As a result of this scheme, these skilled and experienced fishermen are being paid minimum wage for a 39-hour week – while, like all fishers, working much longer hours. This means their actual hourly pay is less than €3.”

“This must be an immediate priority for Minister Heather Humphreys; people need to be sure that the Irish fish they buy is exploitation-free,” concluded Ms McGinley. 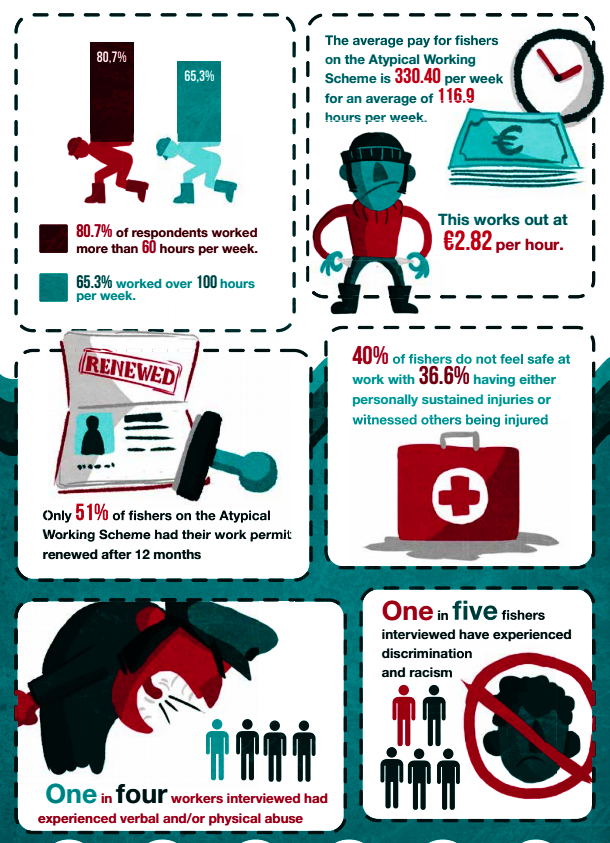